Hazel de Berg and her passion for oral history 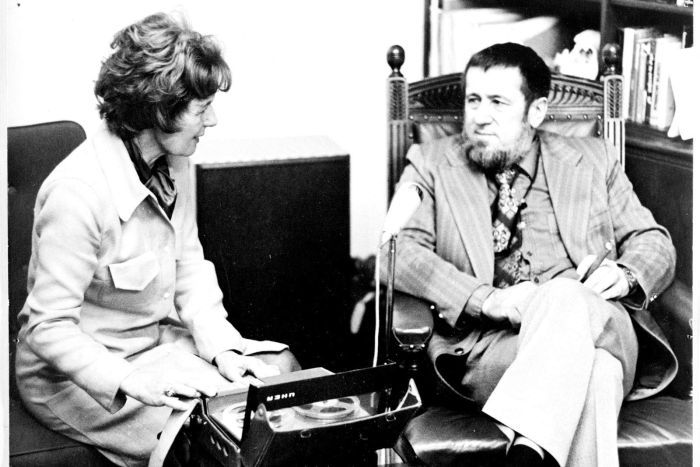 Find out more about the Hazel de Berg Award

Hazel de Berg offered her services to the Royal Blind Society to record for ‘Talking books for the Blind’. She chose to read Dame Mary Gilmore’s ‘Old Days, Old Ways’ and was taught how to use the reel to reel tape recorder. On March 18 1957 she visited Dame Mary in her Kings Cross apartment to invite her to say a few words on the tape. The ‘interview’ lasted 1 minute and 21 seconds – and Hazel was hooked! Interviewing on tape was to be her passion for the rest of her life.

Hazel was determined to interview other writers, novelists, poets, dramatists, journalists and historians. Prompted by Sir William Dobell’s just completed portrait in 1957 of Dame Mary she embarked on interviewing artists. She also interviewed actors, scientists, musicians and a few politicians. Before she was married she had been a professional photographer and she almost always took a picture of her interviewees. 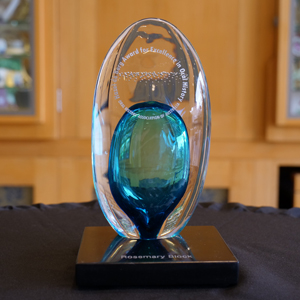 In 1971 Hazel was formally contracted to the Library to do 60 interviews a year. This she carried out so conscientiously that in 1984 when she died suddenly of a heart attack, she had recorded just over 1300 interviews. These have been listed and described in a special catalogue published by the National Library in 1989. All of her interviews are fully transcribed.

The Hazel de Berg Award is for excellence in oral history. Excellence is what she strived for. She was always interested in the process of interviewing and when asked many times which was her best interview she always replied ‘the next one’. That tells us a great deal about the woman and in addition encourages us all to keep on trying!

Hazel’s family has donated the beautiful glass sculpture which has been awarded to recipients since the first award in 2006. Just as Hazel de Berg’s oral history collection is for all time so the presentation to the successful recipient will continue to be a feature of the national biennial conferences.