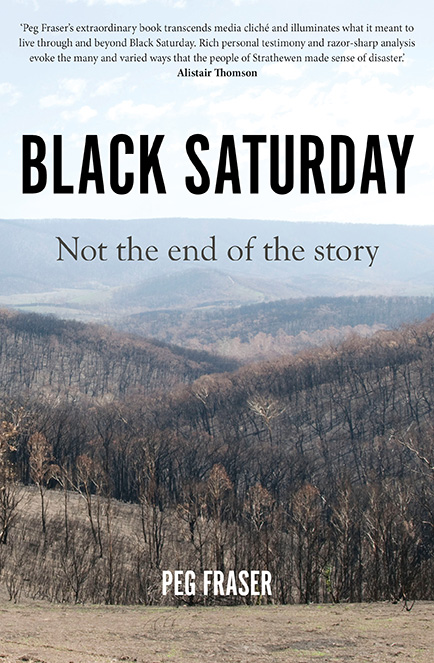 Black Saturday: not the end of the story

The Victorian bushfires of February 2009 captured the attention of all Australians and made headlines around the world. One hundred and seventy-three people lost their lives. In the wake of this tragedy much media and public commentary emphasised recovery, resilience, community, self-sufficiency and renewed determination. Peg Fraser, working as a Museum Victoria curator with survivors in the small settlement of Strathewen, listened to these stories but also to other, more challenging narratives.

Black Saturday: not the end of the story performs the traditional role of oral history of highlighting the voices of ordinary people during a catastrophe, but avoids the trap of fetishising disaster and trauma. It also draws very deftly on oral history theory to challenge dominant stories of resilience and community. Effortlessly written, moving and sophisticated, Black Saturday resonates with a broad audience across academia and the public. The author Peg Fraser also lets the reader know that the interviews are being held and preserved in a major collecting institution, closing the circle in the best practice of oral history. Black Saturday: not the end of the story was also awarded the Oral History Award at the 2019 Victorian Community History Awards.

A City Responds to Crisis: Volunteers and the HIV/AIDS epidemic in Sydney 1980s-1990s

A City Responds to Crisis foregrounds the significant role of volunteers.  We hear them, we learn about them, we understand their motivations and their insights into the challenges they faced. As a result, we become connected to their experiences and to the wider horrors of the HIV/AIDS epidemic in Sydney in the 1980s and 1990s. We are connected to the crisis and to role of volunteers in the epidemic.

The digital exhibition uses extracts from interviews and locates those snippets of testimony in a broader context. Listening, viewing, reading brings to the fore the voices and memories of participants as well as the role of interviewers (you can hear different styles of interviewing, the interviewers’ questions, back-channelling etc), a sense of the environments in which interviews took place (in one we are warned about the interviewee’s pet dog – panting – in the background), and implicitly the central role of oral history in documenting and understanding key themes and issues in the work of volunteers during the HIV/AIDS. The oral history excerpts, explanations and other sources (posters, photographs etc) are made accessible through clearly identified key themes that sit as the entry point on the first page of the website. There is also the opportunity for people to share their stories.

The Making of Mardi Gras

These two half hour radio programs were created to mark the 40th anniversary of Sydney’s Gay and Lesbian Mardi Gras. The first program focuses on the early years of Mardi Gras and its evolution from a protest, police confrontation and arrests to a vibrant, politicised, successful parade and afterparty. The program ends with the foreboding appearance of AIDS and intimations of a decline in the popularity of the event. The second program explores the near collapse of the organisation, and its subsequent revitalisation. Throughout both programs a narrated script links excerpts from oral history interviews (new and archived), contemporary audio recordings, commentary and reflections, and audio recordings from Mardi Gras events, music and ambient sounds.

The programs have a celebratory tone tempered by explorations of the ways in which tensions within the gay and lesbian community shaped the history and nature of the event. The programs also, almost as a by-product, provide a sense of the changing social, cultural and political contexts and status of the LGBTQI communities over the past four decades. These are highly professional productions in which the use of oral history is particularly powerful. They remind us of the value of using both archived and new oral history interviews, and of the evocative effectiveness of careful selection, scripting, editing and interpretation. We are drawn into the commitment to, and understanding of, the issues and events shared by the producers.